Year 2015: our rugby family at the Summer Tournament

Our friend and referee Buzz McLean
Parents, thank you all, again, for entrusting your kids to us. We enjoyed working with your kids throughout the year, and look forward to everyone continuing to embrace rugby. All those tag kids are going to become fantastic, experienced tackle kids!

Thanks to the parents who were always willing to step up and help with the socials. It is not always fun to set it all up and manage the tables, but it can be very satisfying! Especially when everyone chips in. The social aspect is what makes us a little different to other sports. It’s a tradition we will embrace so look out for my emails.

Referee Patrick LeFloch
I would like to thank our 3 referees: you may not realize but it is really tough to arrange home field tackle refs. We are lucky to have our 3 musketeers in Buzz McLain, Patrick Le Floch and Vinny Panigot – so far we have always managed to have at least one show up and cover us at home.

And now we also have our own Rich Babcock who is a newly certified ref. We need more club referees, please step up!

Referee Vinny Paginot
We’re also very fortunate to have medical coverage on the side of our field at every home game. You may have noticed that not many clubs are able to offer this service. The wonderful people at Great Falls Fire Department, Chief Doug Wessel and his crew, have been at every home tournament and we are very grateful for their support.

We all met up in Haymarket VA again for the season-ending tournament. We entered 7 teams into the competition: U7, U9, U11 (touch teams), and U13, U15, High School JV and Varsity (tackle teams).

Read more below with a few pics.. 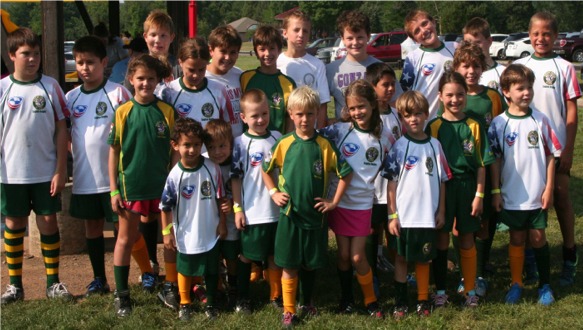 The u7 team had a great day at the final tournament of the season. We have a young team this year, but the pool play games showed off the kids' progress in their individual fundamental skills and their team play. The players were trusting their teammates and supporting each other, resulting in tries spread out amongst the players. We finished the day with a win in a third game that showed some great passing and group efforts. I look forward to seeing what this group can do together next summer as 5 and 6 year olds. -- Coach: Kathy Lett (also Coachs David Lett and Braden Giordano

The U9 kids played a first hard fought match against Loudoun. This was the most kids we had at a tournament all year and it took the kids a little time to gel together. In the end, they were bested by a Loudon team that went on to play for the championship.
In the 2nd match the kids really gelled and capitalized the entire match beating SYA by 6 tries.
After pool play, GF took the pitch against Alexandria and played a hard fought match all the way to the buzzer. In the end, GF came up a little unlucky losing by a conversion.
The final match for the Plaque pitted GF up against another SYA club. Once again, GF played a great match and played a heck of a game and fell short again by a conversion.
All in all, it was a phenomenal tournament for the U9 team. We had a great mix of experienced players and newcomers coming together for the final tournament. I couldn't be more proud and more honored to coach this great group of kids. They worked hard, played with great sportsmanship and came together as a team. It was a great season and I hope to see all the kids out next year. -- Coach: Rich Cestero (also Coach Ben Bjorge). 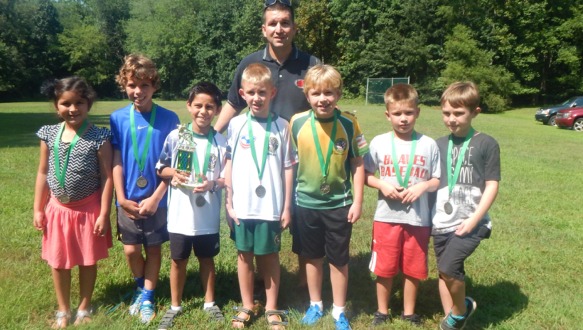 The U11's I'm so proud of every single player that came out to play with the U11s this weekend! Even though this team had never played together as a complete unit, they all came together in an impressive display of camaraderie and teamwork. Every player stayed focused on the game; learning from each match and applying it to the next, helping their teammates to succeed, and even learning to play brand-new positions! Their sportsmanship shone throughout the tournament, and we were all thrilled to see them end the season with a well-deserved win!
I look forward to seeing everyone back next year! -- Coach: Kate Sandusky, and John Milkiewicz.

The U13 team, who's core has now been together for nearly a year, has developed nicely into a well balanced, team. It is always a struggle against the larger teams but I am proud to say that they just don't give up! It has been tough most of the time, with 5 of the kids still U11 playing up and others young U13's. We often fronted opposing U13 kids who looked like young men! We hope to continue working with the same kids this fall and next year!

The U15 team performed amazingly during the tournament. Every coach we played commented on the teams performance, whether to tell other coaches how unbeatable we were in the rucks and scrums or how even without subs we wore teams down, never backing off or backing down. One referee mentioned that the score did not reflect the performance. -- Coach: Jared Nugent
High School JV - On the upbeat side, all of our guys played individually well. Even though they played four matches in the heat, I had to drag some guys off of the pitch to take a break. Unfortunately, the match scores do not reflect the amount of effort and heart that our guys played with. It was great to have had the opportunity to coach with these young men this season. -- Coach: Rich Babcock
High School Varsity - Thanks guys you made me proud, losing in the final to a very good Springfield team is pretty decent! For me, this was our best tournament yet, I loved your spirit and fight, especially in the matches that counted. You guys stepped up the intensity when needed. And off the field you all rallied when needed despite the long waits between games. Good luck to Jack, George and Connor (my tournament MVP!), I hope you continue to play rugby in college. We will miss you. It was a pleasure to work with you all -- Coach: Gary Coetzee. 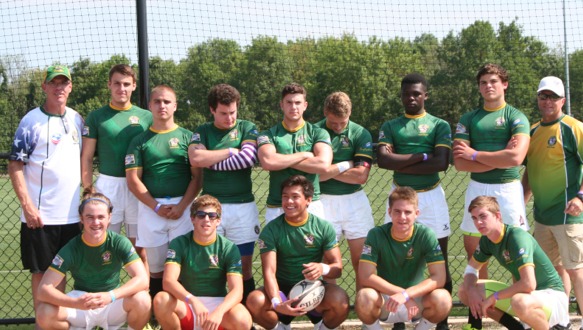