OFFICIAL HOME OF THE GREAT FALLS/MCLEAN EAGLES
Registration is OPEN!

Great Falls Rugby was founded in 2011 by Buzz McClain, where the first season saw only 22 players register for the club, 18 of them under 9! Those young players were brave pioneers who signed up for a sport they'd never seen, much less played, quickly learned its skills and then took to it with the kind of passion typical of rugby players - they couldn't wait to get to the next practice or game. Because it's fun!

Well, there are only two remaining, active players from that first year (Luke Coetzee and JP Vinter), so let's take a quick trip waayyyyy back to the Summer of 2011 :) 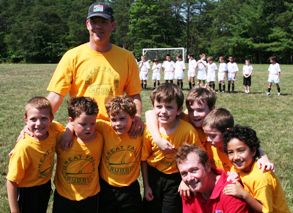 Great Falls Youth Rugby hosted the first-ever multi-team rugby tournament in Great Falls in 2011, when three visiting teams joined us at Lake Fairfax for five hours of games while the parents enjoyed the sideline camaraderie that is the hallmark of the sport around the world.

At the end of 2012 we unfortunately lost Buzz who moved away from the region. The reigns were passed to Gary Coetzee, who has been running the club since.

Great Falls Youth Rugby is hoping to grow the sport and bring rugby to more kids in the Reston/Herndon/Sterling/McLean and Great Falls areas. We participated in our first Spring season early 2013 which was a rewarding experience and unearthed some great talent.

Registration is open and on-going. Players can join at any time during the year and benefit from our program: rugby is now year-round at Great Falls! You only need to register ONCE for all 3 sessions (Fall, Spring, Summer). You are covered for the year.

Rugby Virginia was founded in 2008 and is organized under the authority of USA Rugby. Rugby Virginia is operated exclusively to promote and foster the growth of high school and youth rugby football and to educate the public and players in the game of rugby as played under the laws of the governing body, World Rugby.

Rugby Virginia is composed of high school rugby clubs and youth clubs within Virginia. Great Falls Rugby was created to fulfill a void in the Great Falls/Reston/Herndon/Sterling/McLean area for youth rugby.